For twenty-two years, Insomniac Games have been delighting video game players with their creative, often colorful worlds, over-the-top weapons and AAA games that often feel like they have the sensibility of something made by an indie studio. When it was announced that Insomniac was tackling the Spider-Man license for their upcoming, highly anticipated Marvel’s Spider-Man, it was hard to find anyone who would say this wasn’t a match made in video game heaven. Whether we realized it or not, Insomniac’s previous games have shown, for a number of reasons, just how perfect a match the studio is for one of Marvel’s most long-standing and popular characters.

AS SEEN IN: Spyro the Dragon (series); Ratchet and Clank (series); Sunset Overdrive

Since 2004’s Spider-Man 2 allowed players to crawl to the top of any building, leap off of it and save themselves at the last-minute with a carefully placed web-line, the open-world genre of games have been synonymous with the character of Spider-Man. Even in the early days of the original PlayStation in the Spyro the Dragon trilogy of games, Insomniac have been making large, open areas for players to explore. The areas in Spyro may not be as open as what we’ll see in Marvel’s Spider-Man, but they nonetheless enticed players to explore every inch of them with the title character. This sensibility only expanded with the still ongoing Ratchet and Clank series, which all feature planets that have only gotten more large and fun to explore as the series has moved to the PlayStation 2, 3 and now 4. The studio’s previous work that is perhaps the best showcase of what to expect in Marvel’s Spider-Man is 2014’s Sunset Overdrive. Overdrive was set in a more down to earth urban environment, albeit one filled with mutants who were turned that way because of a soft drink, and more in-line with the world Spider-Man lives in than the fantastical, sci-fi world of Ratchet and the fantasy universe of Spyro.

AS SEEN IS: Ratchet and Clank (series); Sunset Overdrive

What’s so much fun about living in a virtual world created by Insomniac is the tools you can use to get around it. The many planets of Ratchet and Clank are filled with grapple points you can swing from and walls you can walk on with the right equipment – like a certain wall-crawling wonder. Throw in jet-packs, rails you can grind on, hover boards and other traversal tools and it’s no wonder the Ratchet and Clank series has become so beloved by fans of the action-platforming genre. Similar to the Ratchet series, Sunset Overdrive’s world is littered with bounce pads, zip-lines, and other over-the-top abilities that have made it a fan-favorite Xbox One exclusive. Insomniac knows how to make getting around a world fun, and there’s no better character to explore a virtual world with than Spider-Man.

AS SEEN IN: Most all titles but mainly Ratchet and Clank and Sunset Overdrive.

From the perhaps unintentional hilarious live-action FMV’s of Disruptor, the fourth-wall breaking set-up of the original Spyro the Dragon, the Ratchet and Clank series that features a villain by the name of Dr. Nefarious and the plot of Sunset Overdrive that, as already mentioned, revolves around a soft-drink that turns people into mutants, Insomniac has always given off the vibe that they’re a studio who doesn’t take themselves too seriously. Sure, they produced the grim, apocalyptic alternate World War II universe of Resistance, as well as the hauntingly beautiful Song of the Deep, but for the most part, if you want to put a smile on your face while playing a game, one with the Insomniac logo on the box is a sure bet most of the time. Spider-Man is a character that is well-known for his wise cracks, mostly slung at the likes of Doctor Octopus and the Green Goblin, and this is something that Insomniac, more so than most large studios working today, has a lot of experience with.

AS SEEN IN: Ratchet and Clank; Resistance (series); Sunset Overdrive

Ask even a casual fan of Insomniac about why they love their games so much, and a lot of the time a response will probably be “because of the crazy weapons”. The Ratchet and Clank series made a name for itself from even the first entry by having guns like the Morph-O-Ray that turns enemies into chickens and the Groovitron that made enemies break into uncontrollable dance. Similarly Sunset Overdrive introduced a tool called the TNTeddy that launches explosive teddy bears. Though far more serious than Ratchet, Insomniac’s Resistance series of games on the PlayStation 3 featured guns like the Auger that let you see and shoot enemies through walls, and the Bullseye rifle that gave you the ability to tag enemies and shoot them even if you weren’t aiming at them. Peter Parker was a scientist before he ever got bitten by a radioactive spider, and in his superheroic career as Spider-Man he has made numerous tools and costumes that, combined with the web-shooters he created himself, have been invaluable when facing with the enemies he was come up against. We’ve already seen tools like the web-bomb, trap mines, and suits that will augment Spider-Man’s abilities in promotional trailers for Marvel’s Spider-Man, and it’s only a few short weeks now before we get to see what else the designers of the game have come up with.

AS SEEN WITH: Ratchet and Clank (series); Resistance (series) 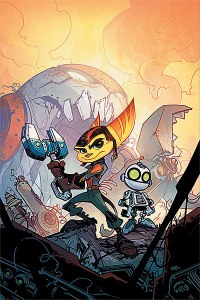 Marvel’s Spider-Man is of course a collaboration with Marvel Comics, and while this will mark the first time Insomniac has used another companies’ IP for one of their games, it’s far from the first time they’ve worked with a comic book company. In the PlayStation 3 era, both Ratchet and Clank as well as Resistance had their own comic book tie-in series from Marvel’s major competitor, DC Comics. DC Direct was even responsible for making Ratchet and Clank and Resistance action figures.

The public has known about Marvel’s Spider-Man for a little over two years, but in some form or another, Insomniac Games have been building towards this for decades. From the way they build worlds, the tools and abilities to play around with within them, their unique sense of humor and past work with the comics medium, there’s no studio that’s better equipped to redefine Spider-Man’s in the interactive medium than Insomniac Games. Soon players will get to see what it looks like when all the characteristics that make up an excellent Insomniac game get applied to one of the most popular superheroes of all time.