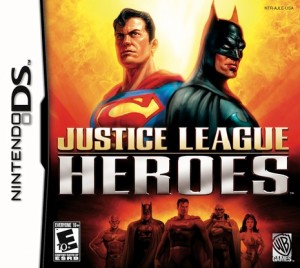 Though it carries the same title as game on other platforms, Justice League Heroes on the DS actually has its own unique story that can conceivably be a prequel to the console game. It features a lot of the same boss characters in the plot as elsewhere such as the Key, Queen Bee, and Gorilla Grodd but the final boss as well as last mission is unique to this title and it ends rather abruptly. The plot for the other versions of Justice League Heroes wasn’t exactly memorable despite being crafted by the late, great Dwayne McDuffie, but it’s far more developed than what’s presented here. This could be due to the fact that the console game is a decently long game whereas Heroes on the DS can be finished in the time it takes to beat the first two missions of the main game. 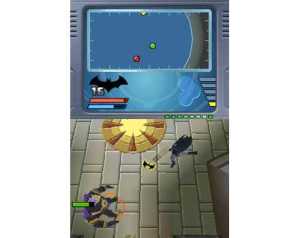 Justice League Heroes on consoles took a lot of criticism for arriving in a far less feature rich state than its Marvel themed competition: You could only have teams of two instead of four and could only choose who you wanted at designated points and loot was near non-existent. When placed alongside the DS version of Justice League Heroes, the console game suddenly looks like one of the most customizable games ever made. Like the console game, every level gives you two heroes but only one appears on-screen and you can change heroes on the fly by tapping an icon on the touch screen. The console game gave a base team of seven members of the Justice League to play as and also allowed you to purchase new characters that you could experiment with at certain points during the campaign. The DS game only gives you four Leaguers in which to play as; Superman, Batman, the Flash and Wonder Woman. The three other characters who made up the console game’s roster: Green Lantern, Martian Manhunter and Zatanna, and a few other DC characters only show up as brief support characters that you can summon after you find items within levels that unlock them.

At its core, Justice League Heroes can be compared to a Gauntlet-lite arcade experience, and not a very good one at that. Played from an overhead perspective, every level charges you with beating up generic bad guys and the gates of different varieties that spawn them. The basic act of attacking doesn’t feel very good at all with punches that never truly feeling like they connect properly which is not good in a game where you’re playing as some of the most powerful characters in all of comics. Often you’ll be presented with sub-objectives like saving a few civilians or destroying a certain number of objects within a level like a generator, but these tasks are never mandatory and only exist to add replay value. Needless to say you don’t really get the sense that your playing as a member of the Justice League when you can walk past people in peril with no penalty whatsoever.

To help alleviate the repetition of its brawler roots, Justice League Heroes added RPG-lite mechanics where gaining experience from fighting allowed you to gain new abilities for your team, level up existing ones and boost stats like health and combat proficiency. Items could also be collected in levels which could be slotted into your moves and stats to further enhance them or conversely you could also combine items to make more powerful ones to be added to your character of choice later. Heroes on the DS does away with nearly all of this. You still gain experience by defeating enemies which in turn levels up your characters, but every character levels up exactly the same and has same basic move set activated with identical button combinations, making a character like Batman no different from Superman. The only thing to collect in the environments are the items that unlock support characters as there’s no power-ups to augment your stats to speak of, and you don’t even need to bother to seek those out mostly because Justice League Heroes is a very easy game. 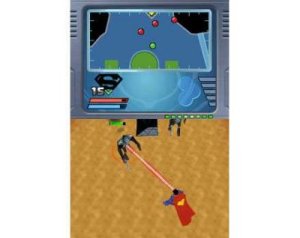 One of the extra abilities you unlock very early on in Justice League Heroes is a ranged attack, and once you have it, it’s about all you need to get through the entire game. You can stand safely aware from most enemies, spamming your heat vision with Superman or Batman’s batarangs, wait for your meter to fill back up or go in few a few punches if you’re impatient, rinse and repeat. There are strategies that are sound for even the few bosses you come up with, and this makes some of the most dangerous villains in the DC Universe no more a threat than an enemy generator. About the only boss that require you to think, and you don’t have to that much as the game tells you what to do, is early on when you have to fight a brainwashed member of the League and you have to throw barrels at them. Should your health get too low, you can simply change-up your character to your secondary one which allows your character to rest up while simultaneously given you full power.

If you’re looking for a Justice League Heroes game to play on the go, pick up the far, far superior game on the PSP. About the only reason to seek out JLH on the DS is if you’re a huge fan of the console game and appreciate that the story can be seen as a prequel of sorts to that game or if you only have a newer model DS and no PSP and simply must have a Justice League handheld game. The arcade, brawler inspired gameplay is as basic and loose as it comes, the RPG trappings of the main game have been stripped down to the bare minimum, the roster is small and finally JLH is both short and easy. There’s nothing in this game that remotely makes you feel like you’re playing one of the most iconic comic book teams in history.