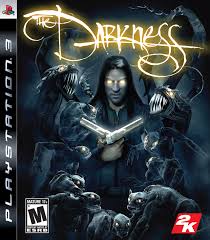 In 2004, developer Starbreeze impressed a lot of people with the release of the Xbox original exclusive The Chronicles of Riddick: Escape from Butcher Bay. Launching alongside The Chronicles of Riddick film, it was a rare example of a game being much better received than the movie it was meant to support, something not really seen since GoldenEye 007 on the Nintendo 64. Given the success of Riddick, people were excited to see what Starbreeze would do next and it was surprising to hear that their first post Riddick project would be a take on an Image comic series that peaked in popularity in the 90’s, The Darkness. As an early seventh console generation game, The Darkness impressed like Riddick before it, and while it hasn’t aged particularly gracefully, it’s story telling, voice acting and tone make it worth playing even over a decade divorced from when it was new.

In The Darkness you play as Jackie Estacado, a contract killer for the Franchetti crime family. On his twenty-first birthday, a symbiotic entity awakens within Jackie, the titular Darkness, granting him supernatural powers and abilities. On the day that The Darkness awakens within Jackie, he’s marked for dead by his uncle Paulie, the head of the Franchetti crime syndicate, and Jackie must learn to understand and control the creature that he know shares a life with while dealing with the ramifications of fighting for his life against a crime family out for his head. When it was new, The Darkness was highly praised for its story and ten years later, it’s still what makes the game worth tracking down and playing. While the game is based on a comic book property that had its origin in the 90’s, it feels like more of a mafia crime revenge story with the more fantastical elements of the comic book sprinkled in just enough that it doesn’t undermine the story and bleak tone that Starbreeze created.

In spite of its comic book origins, The Darkness’ world feels lived in and real.

A lot of what makes the story great is owed to the writing and the voice action from the likes of Kirk Acevedo (The Walking Dead, Dawn of the Planet of the Apes) who brings a tremendous amount of humanity to someone who has done, and continues to do throughout the course of the campaign, despicable things. Asides featuring Jackie talking to the audience about his past and current plans mask loading times, but they’re always engaging, some even quite funny, until they start to repeat themselves but they nevertheless offer insight into Jackie’s psyche. The stand out performance goes to Faith No More front man Mike Patton who voices The Darkness entity with creepy, quiet whispers and loud guttural growls. I wouldn’t be opposed to someone crafting a solo video game based around Marvel’s Venom character and hiring Patton to do the same thing.

What also sets the tone of the universe is the visual aesthetic. What was pretty impressive for a game in the early days of the last console generation looks dated now, it still paints the picture of the seedy life that Jackie has been raised into. The game is set in a few blocks of New York City, and it’s not the bright, bustling metropolis you’ll find in a game like Spider-Man 2. Instead be prepared to enter dank subways littered with graffiti and the homeless, dark back alleys and buildings with boarded up windows.This is complemented by the haunting soundtrack that only make the world feel more somber than what’s already on display.

There’s no heads up display to speak of in The Darkness, and its exclusion allows you soak up the universe and draw you into it. Games of the time like Perfect Dark Zero and even the original Bioshock that also released in that year struggled with how to direct the player, putting big, Crazy Taxi like arrows at the top of the screen, but The Darkness cleverly makes you get around almost like you would in real life. Someone will direct you to a specific street on Chinatown and you can easily locate it through the use of street signs, maps, even by asking for help from customer service at a subway station. 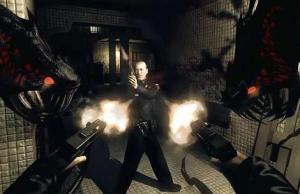 The Chronicles of Riddick was a first-person game with an emphasis on stealth, but you get to play things a little louder in The Darkness with an assortment of firearms you can pick up like pistols, machine guns, assault rifles and shotguns, some of which can be dual wielded. The Darkness isn’t what you call a run-and-gun shooter though, and shooting feels serviceable at best with the guns feeling particularly weak. This could be because The Darkness is one of the early PS3 games that existed in the nebulous time in which games on the platform weren’t allowed to have rumble added and no patch was added after the fact to correct this. The best use of all the weapons you collect is shooting out various light sources: street lamps, neon signs, spotlights, to utilize your Darkness abilities.

When you’re using your Darkness abilities, you feel like the unstoppable killer in a horror movie and it’s an incredibly satisfying feeling that few games, even this one’s sequel, have failed to capture. You start out with the ability to send out a snake-like demon that can get places you can’t and maul enemies from a distance and throughout the campaign your abilities will grow until you can eventually summon mini black holes that can suck enemies into them. Via portals found throughout the world you can also summon creatures called Darklings that come in various types as well: one will rush to an enemy, while another will seek out light sources to destroy such that you can refill your powers. There’s nothing quite like finding a safe corner, taking out all the lights and then unleashing your creeping Darkness powers and see the horrified faces of screams of your enemies who have no idea what it is that’s attacking them. The Darkness is based on a comic book, but the universe at least in the video game adaptation is one where monsters and demons are mere superstitions and Starbreeze did a great job of creating the appropriate reactions of the people who meet their untimely end at the power of The Darkness.

While using The Darkness is a terrific hook for this game, the powers you develop over the course of the game, save the black hole bomb, never capture the primal thrill of using your first ability and neither the combat scenarios or levels ever really call for a creative use of your abilities in most cases. You get the power to summon a tentacle that can move objects in the environment, but it’s never really useful other than the first time it’s introduced as The Darkness doesn’t have a real advanced physics engine; It’s also easy to get your creeping Darkness monsters stuck on pieces of scenery, causing you to have to retract them and start over to adjust your bearings. Because of your powers, the game can sometimes be a little too easy, such as one stage that takes place on a ship which you can clear out without ever entering, but then there are sections where your powers are taken away and you’re forced to use just guns and the difficulty spikes to frustrating levels.

This occurs mostly in a series of levels where you’re transported into a weird version of the trenches of World War II. It’s in these parts that the game tries to offer some back story on The Darkness entity, but not only do these levels offer little in the way of development on the The Darkness, they also serve as a bad juxtaposition to the more serious revenge story line and you’ll want to get through them as quickly as possible. More so than adding backstory, the trench stages also exist to lengthen the game as The Darkness is pretty short. It’s easy to get around New York City, but you also get the sense that the time it takes you to get around is meant to pad out the campaign, most noticeably in the few side-activities you come across where one person in one subway section will keep sending you back and forth between two areas over and over again. The backtracking also makes the world feel smaller than what it should be for a game that takes place in an area as big as New York City.

For all its faults though, The Darkness is still very much a title worth playing for its story that’s far more mature than even some games today. Those looking for a traditional first-person shooter will come away disappointed as guns are best used for light switches, but the weak gun play is more than made up for by the empowerment granted by The Darkness symbiote. The campaign is short, and at times feel like it’s padded to get to the length that it is, but it’s straight forward design also complements the tight story telling in the same way it did with The Chronicles of Riddick in 2004. Funny enough The Darkness was overshadowed by a lot of the stellar story driven experiences that came out during the last console generation, even in that same year, but it deserves to not be forgotten or missed if you’ve never experienced it for yourself.

One thought on “REVIEW: THE DARKNESS (PS3)”