By AA games I mean the 8’s out of 10, the titles that aren’t the safe, formulaic AAA blockbusters that publishers like Ubisoft and Activision churn out on a yearly basis nowadays. The games that still feel like they belong on a store shelf with a $60 price tag yet still offer something unique. Given the high cost of development of games in this era of 4K TV’s, PlayStation 4 Pro’s and Xbox Scorpio’s, I understand the business logistics of why every game that’s sold in a store feels like it has to cater to as many people as possible. In the late days of the PS3/Xbox 360 and even know there’s always a story of how because that one game didn’t hit like it should, a company is forced to close and it was because of this, and many other bonehead decisions that a major publisher of not-quite-AAA games THQ closed its doors.

One franchise that got caught in the crossfire of all this was Darksiders, a series that debuted in early 2010 from now defunct developer Vigil Games whose staff came together to form a new studio that are now working on the Kickstarted RPG Battle Chasers: Nightwar, based on the comic book of the same name. Though Vigil is no more, publisher Nordic Games, now called THQ Nordic, purchased the IP and over the past year has tried to bring the series back from the dead. First by re-releasing Darksiders II: Deathinitive Edition, a remaster of the second game in the franchise last year and now through a second remaster, this time of the first game in the series, dubbed the Warmastered Edition. Discounting the low asking price of $19.99 CAD, Darksiders: Warmastered Edition is a game that has is not by all means perfect, but may hold you ever until a certain franchise makes a return on a new console next year.

In Darksiders you play as War, one of the Four Horseman of the Apocalypse along with Death, Fury and Strife. In the universe of Darksiders, the Horseman are governed by a mediating council between the kingdoms of Heaven, Hell and Man who will call the four to enforce this balance when needed. War arrives on earth at such at time when the armies of Heaven and Hell are locked in combat, only to find his brothers nowhere in sight. Finding himself framed for pre-maturely starting the Apocalypse, War is granted permission to return to earth stripped of his powers to find out exactly why he was incorrectly summoned and who was involved.

The universe of Darksiders is an interesting one that you want to explore and know more about, however the plot of the first game in the series is not the most compelling, due in part to the main character. War, first of all, with his massive frame, giant gauntlets and hooded visage feels a tad over designed from a visual stand point and is not really that compelling of a protagonist. Secondly, we don’t really find out anything about War nor does he exhibit any real character development despite being humbled at the start of the game. That being said, you can forgive this shortcomings in the development of the main character because the universe as a whole is pretty well-developed. You may not find yourself caring that much about War’s quest for redemption, but you will be all in to explore an earth that was torn about by armies of angels and demons locked in a seemingly endless strife. 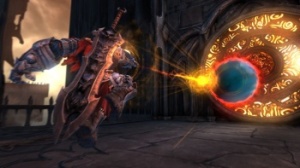 Does any of this look familiar to anyone?

When it arrived in 2010, Darksiders was often referred to as a game that, to put it nicely, “borrowed” from a lot of other popular games at the time and that’s not a wrong statement to make: It has combat that tries to be somewhat like Sony’s God of War franchise; At one point you get a tool that fires orange and blue portals that only work on certain surfaces and above all else, you can tell that the development team loved the Legend of Zelda. In his journey to find out why he was summoned to start the Apocalypse, War must visit four dungeons like areas to collect four items of value to a party, collecting and using weapons like bombs, a boomerang and a hookshot. There’s even an item called a “Hoardseeker” that tells you where treasure chests are hidden in a dungeon, a sound that plays when you open said treasure, and important pieces of texted are highlighted blue in the sub-titles.

Darksiders straddles a fine line between homage and rip-off, but given that the Legend of Zelda is one of the longest lasting and most beloved series of games ever, it’s amazing that there isn’t more games like this, let alone ones that are put together this well and by a first-time developer no less! Darksiders hits all of the Zelda tropes that make people froth at the mouth for each new installment. The dungeons are filled with environmental puzzles to complete that require you to put your arsenal and thinking cap to the test with the major stand out being the temple that holds the “Voidwalker”(Portal Gun) that not only has puzzles that would impress Valve, but puts the tool to use in combat in a way that you would never see in Portal. Like Zelda, you’re always curious/excited to see what tool you’re going to get next and what creative use it will used for in both solving puzzles and fighting bosses.

It’s the thing you do between dungeons that kill the pace in Darksiders and starting out, the game doesn’t make that strong an impression. Darksiders is at its best when you’re alternating between combat, traversal and solving puzzles but starting out the game leans a little too heavy on combat and it does so at scattered points throughout the campaign as well which tends to drag the experience down a little. Despite wielding a sword that’s about the size of an average person with the ability to collect additional weapons like gauntlets, a gun, scythes each with purchaseable upgrades and combos, fighting in Darksiders is never really that fun and most of the time you’ll try to avoid it when possible. You can juggle enemies, hold them in the air with your pistol like Dante in Devil May Cry and manage two weapons at a time, yet the best tactic most of the time is just pounding on square and rolling out-of-the-way. Enemies tend to take far too long to kill even when you’re at our most powerful and the experience you gather isn’t really that worth it when your upgrades don’t seem to really matter that much. 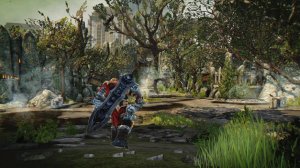 Being a close to seven-year old game and set in a post-apocalyptic earth, you would think Darksiders would not hold your attention visually but that’s not the case at all. The Warmastered Edition boasts PlayStation 4 Pro support, but even without that system nor a 4K screen in which to test the game on, it still is a visually impressive game with a lot of fantastic environmental variety. There’s of course ruined cities and run down offices, but they’re contrasted with angelic cathedrals, a desert peppered with patched together wooden demon towers and dungeons overrun with spider creatures. The only real hiccup to be found that does sour the package is an issue with the cut-scenes. In the remaster the lip movements don’t match the dialogue being spoken and it takes you out of the experience when the sub-titles switch to another character when one isn’t finished talking. There has been a patch that has come out recently for this game so hopefully it fixed that issue.

The issue with presentation in the cut-scenes aside, if you’re a fan of Nintendo’s Zelda series and want to try something a little different, Darksiders is a terrific series to invest into. The pacing and combat could be a little bit tighter, but all of those problems are far outweighed by the world building, dungeon and puzzle design. At a price of only $19.99 when other publishers would charge $40 or upwards and with no Breath of the Wild in sight, there really is no reason to give this dormant franchise a first, or perhaps even second look.