Earlier today we received news about the continuation of Telltale games Batman series, and now mere hours later we also have information about their return to the universe of The Walking Dead. Announced today at PAX is the third chapter in The Walking Dead saga that started back in 2012, but it won’t follow the traditional Season One and Two titles of the previous chapters. The new title for the series that launches this coming November for consoles and mobile devices is The Walking Dead: A Telltale Series – A New Frontier. 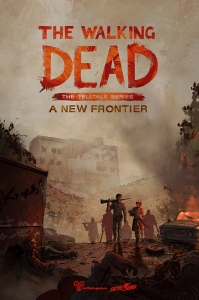 A New Frontier will continue the adventure of Clementine, now a teenager, as she struggles to survive in the post zombie apocalypse universe along with a new comer by the name of Javier. Like Batman: The Telltale Series, the upcoming season will be sold digitally alongside a Season Pass disc that will contain the first episode and an unlock to download the remainder of the series as it comes available for download. From Kevin Bruner, co-founder and CEO of Telltale:

“This third new season will serve as both a continuation of what’s come before in our story, as well as an all-new beginning set nearly four years after the outbreak events of Season One,”.
Kevin Boyle, executive producer of the series added:
“When we began this series, we explored what it meant to protect a character like Clementine at all costs…Years later, meeting her for the first time, Javier will begin to unravel the mystery of who Clementine has become, as her story intersects with his — both of them still driven by the things they value most long after society’s collapse.”

One thought on “PAX 2016: TELLTALE’S THE WALKING DEAD REANIMATES IN NOVEMBER, BUT DON’T CALL IT SEASON 3”