DC has found great success in adapting its video game properties into comics, like the still ongoing Injustice: Gods Among us as well as Batman: Arkham Knight which outside of its weekly digital comic will soon get a series about the origins of the title villain. Marvel iT seems is also keen on bringing video game fans into the comic fold with a new ongoing series in the fall inspired by Kabam’s mobile fighter Marvel Contest of Champions, which itself was based on a 1982 comic series. Unlike DC’s books that take place within their own pocket continuity, the title written by Al Ewing and artist Paco Medina will be set within post-Secret Wars continuity. The plot of the series, much like the game, has characters from the Marvel Universe fighting in a contest organized by The Collector. Expect it on store shelves in October. 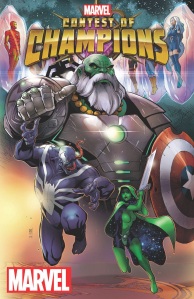