Nintendo took quite a hit in the mid-to-late 90’s due in no large part to the popularity of Sony’s PlayStation: games were cheaper to manufacture on disc and therefore cheaper to sell through to the consumer, a lot of Nintendo faithful third-parties from the 8-16 bit era abandoned ship to Sony’s platform and it had a wider range of mature games. That’s not to say that the Nintendo 64 didn’t have a lot going for it as well. As always it had its power stable of first-party franchises, like Super Mario, The Legend of Zelda, and Mario Kart, along with their Rare developed titles like Banjo-Kazooie, and most importantly Goldeneye 007. What really made the N64 stand out from its competitors though were the four controller ports on the front of the console. This design choice turned the machine into the system to own for party games: Races and battle-mode in Mario Kart, mini-game shenanigans in Mario Party, and the introduction of the first-person shooter deathmatch on consoles in Goldeneye 007.

Acclaim dabbled in the first-person multi-player space in Turok 2: Seeds of Evil, but in between that game and the trilogy’s conclusion in Turok 3: Shadow of Oblivion, they created a game outside of continuity that focused first and foremost on multiplayer for consoles that would stand to compete with PC multiplayer first games like Unreal Tournament and Quake III: Arena that would arrive in the same year. While an interesting experiment, Turok: Rage Wars is a title that’s very much of its time and doesn’t really hold much relevance in today’s over saturated first-person obsessed multi-player climate.
The Turok titles didn’t always have the deepest narratives, but Rage Wars throws all semblance of story out the window. The game has an option for solo-play complete with levels objectives that need to be satisfied, but these exist as single-player deathmatches where human opposition is replaced by bots. Objectives come in one of four flavours: kill so many enemies, capture the flag a set number of times, beat a boss, or the worst of the four monkey tag where your goal is to kill the person designated as “The Monkey” who has no offensive power to speak of. 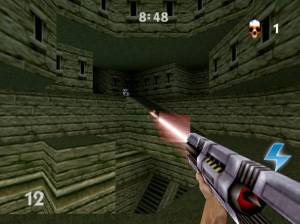 I could be a female and you would never know.

The only reason your going to want to play this mode is to build up your roster of playable characters. Starting out you’ll only have three: Turok, Adon and an Elite Guard, all of which play and look identically. It’s pretty hilarious to select Adon from as the developers didn’t feel it necessary to create a feminine set of arms so she ended up with the same, bulky arms as Turok. One of my favourite characters to play is one you unlock fairly early, that character being the velociraptor who has no long range weapons to speak of, just the ability to run up and flail his tiny arms like a madman. 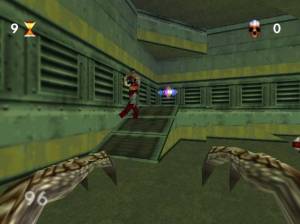 Anyone who played the previous Turok’s should have no trouble jumping into Rage Wars as it plays exactly the same: aim with the analog stick and move with the C-buttons. A complaint I had with Turok 2 was that it felt a bit slow compared to the original Turok: Dinosaur Hunter but that’s not the case with Rage Wars which is an incredibly good thing as it’s meant to be a fast-paced multi-player experience. If you have the N64 expansion pack the graphics also look really sharp, though the small, bland looking arenas aren’t that interesting to look at visually, especially compared to the lush jungles of the first game and the architercutre of its sequel.
Though it isn’t exactly a terrible game, Rage Wars is a hard game to recommended today, and even when it was new. As far as retro N64 games go, Turok: Rage Wars is a game that won’t set you back very much, yet there isn’t enough content on the cart to hold your attention. Back when it was new it was a tough sell because the singe-player “campaign” was far too anemic to be sold as a $70 game. Another problem is that there is an option to play the campaign with a friend, something that’s always a plus in repetitive games, however there’s a bug in the game that prevents more than one player from completing the monkey tag levels. Back when the game was new someone who purchased the game had the option to get in contact with Acclaim and have them issue a replacement grey cart version of the game with this bug removed (this was before the era of patches), something that’s no longer an option and has also caused the price of this SKU of the game to sky rocket to several hundred dollars on sites like eBay.

Throw down a couple of hundred bucks and I’m yours.

Why Rage Wars also seems like an odd experiment at least to me is that Acclaim’s Turok series never seemed to be that concerned with this type of gameplay. The games were played from a first-person perspective and sure, you shot up a lot of people, dinosaurs and mutants, but the action always took a back seat to exploration and level traversal, something that this game decided to make its big selling point on.
Turok: Rage Wars is not an expensive game to track down, but even at a low price point, it’s not worth owning when there’s so many better multi-player games on the N64 and games like this are either free or a dime on dozen on services like Steam, PSN and XBLA. If you want to play a Turok game, there’s three much better options on the N64 with enough content to keep you busy for a long time, two of which have multi-player options with a more robust single-player experience.