With the release of Disney Infinity, I’ve been reading a lot of great stories on various web sites about adults recovering the joy they had playing with action figures as a kid, a sentiment I’m definitely feeling even after only putting a few hours into the 2.0 edition yesterday evening. With the anticipation I felt looking at my purchase throughout the day and the excitement that came from unboxing all the awesome Disney Infinity toys, it got me thinking about some of my favorite toys I played with over the years growing up, so I decided to share a list of ten of my favorite toy lines from over the years.

This is probably the earliest memories I have collecting toys, thumbing through the pages of the Consumers catalog (a defunct Canadian business) to see what was coming out to mark on my Christmas list. The four main characters were great in all their various incarnations, but the really memorable toys were the crazy monsters they came up with, like a toilet whose flush box and lid opened to reveal eyes and teeth, a garbage man that turned into a fly monster, and a car that transformed into a praying mantis. Of course, who could forget the awesome role-playing accessories that I spent countless hours wearing along with my homemade costume, like the goggles, proton pack and slime blower.

I don’t think it was actually possible for any child born in the mid to late 80’s to escape Teenage Mutant Ninja Turtles madness, it was EVERYWHERE: A cartoon, comics, lunch boxes, cereals, clothes, a movie, and of course, toys. Much like Ghostbusters, having the Turtles themselves was cool, with their distinctive colors and punch out ninja accessories, but there were so many crazy mutants thought up for the cartoon that made their way to toy form, like the pizza chef (sorry, I forget this name) that had a peg leg with a pizza box at the end, Muckman, Wingnut and Screwloose, I could go on and on forever.

Teenage Mutant Ninja Turtles as a toy line wasn’t defined just by its action figures, but also by random assortment of vehicle you could buy. You had the Party Wagon that could house all of the turtles, the Shredder’s car that we all knew was for the Neutrinos, Playmates!!!….ahem, and the battery-powered Pizza Thrower, though mine had a battery leak and stopped working.

Sing it with me, folks!:

Though short-lived with just one season and sadly no attempts at a reboot over the years, Bucky O’ Hare was a cartoon that defined my child hood and the first time I would ever possess all the figures as well as vehicles for an action figure line. O’Hare’s crazy cast of characters, from a greet rabbit garbed in a red and yellow outfit, to a four armed eye patching wearing duck and a purple anthropomorphic alligator cleverly named Al Negator, were born to be made into action figures. Unfortunately due to some weird shipping that saw the villainous Toad Air Marshall flood stores shelves, we never saw a second wave of figures due to poor sales. The second line would’ve reportedly contained first mate Jenny, one of the shows must predominant characters that mysteriously didn’t get a first wave toy.

The toys based on the first Tim Burton Batman film were pretty minimal compared to a majority of lines based on films; You had Batman, the Joker, Bob the Joker’s goon, the Batmobile and the Batwing. Kenner’s Batman Returns figures were the first time I recall a company concocting unnecessary Batmen, like the neon green (perfect for hiding in the shadows) deep-sea Batman, and the white arctic suit Batman. Notable for the line was the inclusion of a character that was not in the film, a Tim Drake inspired Robin, and the mysterious absence of Catwoman from the back of the packages. Perhaps the stand out vehicle from the line was the Bat-Missile Batmobile that split apart like the movie, and who could forget the Batcave play set: 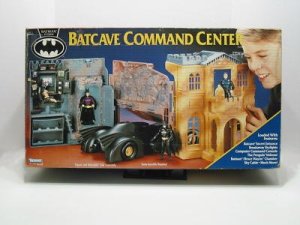 The one that was so good they repainted it not once… 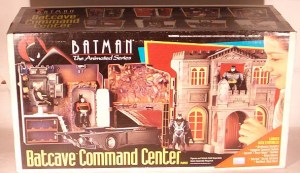 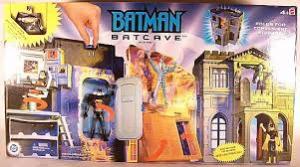 I got my first X-Men figure, Nightcrawler with suction cups on his leg and hand, before I even recall knowing what X-Men even was. The first line, comprised of Wolverine, Nightcrawler, Colossus, Storm, Cyclops, Wolverine and Magneto, wasn’t that common in our parts, but after the X-Men cartoon debuted on FOX Kids, more waves began being produced and they showed up a lot more at our local Woolco/Wal-Mart. I didn’t have nearly as many X-Men as some of the other toys I played with, but I still managed to get some of the best members of the roster, such as 90’s Cyclops, Professor X with hidden guns in his hover chair, Rogue with removable belt, Beast with the jumping action that never really worked right, and the infamous Gambit with plastic coat and leg that always broke. Seriously, I, along with two other of my friends, had this figure and each of them broke.

5) TIGER’S CAPTAIN PLANET AND THE PLANETEERS

As a kid, your susceptible to a lot of things, and in my case, the environmentally friendly Captain Planet was one of them. I had each of the core members of the Planeteers that had some neat actions, like Wheeler, owner of the fire ring that sparked in his chest with a flick of a lever on his back, and Gi who shot water out of her ring with the aid of a backpack. Poor Kwame though, his action was having Mati with him. One of the things I’ll remember most about these figures is getting the bad buy character Duke Nukem, whose action was to glow in the dark because he was radioactive, then seeing Duke Nukem the video game character many years later and thinking “like the Captain Planet character?”

One of the many series that tried to capitalize on the Ninja Turtles craze was this one, a show about three motorcycle riding mice from Mars (one voiced by Sharknado’s Ian Ziering!) who ventured to Earth to stop the aliens that destroyed their home world. The figures were okay, but the best part about them was their exceptionally cool motorcycles (Sold Seperatly, of course.) One that I found under my car seat around Easter time that debunked the existence of mythical gift giving entities.

Power Rangers has never really left toy shelves or the air waves, but they were never quite as in demand as they were back in the mid-1990’s, so much that I only ever managed to get one of the first edition figures, the Blue Ranger. To me though, the Ranger toys were nowhere near as cool as the Megazords, and probably one of my more memorable Christmas’ was getting the Thunderzord assault team, the Red Dragon Thunderzord, and Tommy’s White Tiger Zord. I didn’t even so much play with them fighting bad guys as I did putting them into one configuration, then taking them apart and putting them in another, changing the White Tiger and the Red Dragon back and forth between their animal and robot modes, more than likely singing the Go Go Power Rangers! song aloud.

This line of toys based on the 1990’s animated series was probably the last time I recall buying toys and playing with them as opposed to buying toys and collecting them. A problem I have with toys nowadays is that I see a pile of the one character, like Spider-Man, and one, if not zero villains; That was not the case with Spider-Man. Sure, you had a few variations on the web-slinger, but you also had a pile of rogues to put Spider-Man up against, from older foes like Green Goblin, Doc Ock, and the Rhino to newer characters like the symbiote duo of Venom and Carnage. I crammed these into a fanny pack to bring with me to school everyday, ridicule be damned, and I couldn’t wait for grocery day so that I could go and simply catch a glimpse of the figures that I didn’t have.

1) KENNER’S STAR WARS: THE POWER OF THE FORCE

Right on the cusp of the original trilogy theatrical rerelease and when the Phantom Menace was a mere rumor in the pages of Wizard Magazine, Star Wars fever hit me bad in my early teenage years. This wasn’t helped by the debut of the Nintendo 64 and the Shadows of the Empire video game with its amazing recreation of the Battle of Hoth. I don’t really care so much for Star Wars these days, but in 1997 my allowance money couldn’t come in fast enough so I could get just one more Luke Skywalker and that Yoda who fit on his back. This was the first time I thought of figures as something that could be considered collectible as opposed to play things, or perhaps maybe that was the justification I thought up to warrant getting the Millennium Falcon play set with sound effects for my thirteenth birthday.

KENNER’S JURASSIC PARK: Alan Grant with net launching back pack, the jungle explorer with blood sample collecting missile, and though I never had him, I remember seeing the Dennis Nedry with detachable arms.

GALOOB’S SUPER MARIO BROS. THE MOVIE: Not only was there a Mario Bros. live action movie, but toys based on said movie as well. This line marked the first time I owned a Mario and Luigi toy that wasn’t a McDonald’s happy meal toy.

KENNER’S ALIENS: I never saw Aliens as a kid, but that didn’t stop me from wanting the toys. I owned less than a handful, with the standout being the Scorpion Alien that exploded and showed his guts.

HASBRO’S TRANSFORMERS: Of course I played with Transformers, but I never really knew who any of them were with the exception of Megatron, Bumblebee and Optimus Prime. The one I got the most mileage out of was the Power Master Optimus Prime, a highly sought after piece according to my Mom. 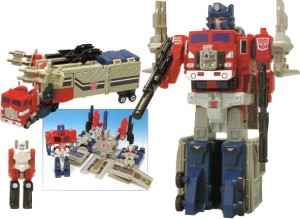