Konami was one of the many companies who started making Batman games once Sunsoft abandoned the license. After starting out with a game based on the Batman Returns film, they turned their attention towards making games inspired by the 90’s Batman animated series. Their last outing, The Adventures of Batman and Robin on the SNES, is a testament to the company’s amazing work with licensed properties in the 8-16-bit era and is in my opinion one of the single best games on the system.

The title “The Adventures of Batman and Robin” leads you to believe that the game is a two-player affair with one player controlling Batman while the other takes on the role of Robin, but that’s not the case; This is for one-player exclusively. I can speculate that this game was more than likely in development when the show was simply called “Batman: The Animated Series” where Robin only showed up periodically, and released after Fox rechristened the show with a greater emphasis on the Dynamic Duo as a team.

There’s no single story thread throughout the game, however each level has its own one-and-done structure that smartly emulates how the show was done, complete with title card openings, making the whole package feel like a season of the series and an excellent adaptation. In one level you’ll be chasing the Joker through a twisted fun house, then off to a greenhouse filled with Poison Ivy’s twisted plant creations, followed by a spin in the Batmobile and a maze filled with traps developed by the Riddler. You’ll never ever feel like Konami is boring you with the sheer amount of environments you’ll see throughout the game.

For fans of the show it’s a cornucopia of Easter eggs to be uncovered in each level, as a majority of the enemies you come across are ones that Batman has come across in the show. This level of faithfulness is astounding as you battle the Penguin with his helicopter gunship in the background, or go up against Poison Ivy’s venus flytrap monster. Prior to writing this, I replayed the game and have been working my way through the animated series from the beginning and love having those “aha!” moments as I see something come up in an episode that I toppled in the game.

This does have its drawbacks, though. I would recommend this game to anyone who isn’t either a fan of Batman or the animated series, but you have to be a fan of both in order to beat some puzzles later on. I remember renting this game when it was brand new and reaching the second to last level, which is a take on the “If you’re so smart, why aren’t you rich?” episode that featured Batman and Robin trying to best the puzzles found in the maze of the minotaur constructed by the Riddler. In order to progress in the maze, you have to solve puzzles that you can’t find the solution to in the game, only the show. The first two offer you a choice of three answers, so if you don’t know you can always guess until you get them right. The last requires you to select two letters that are the first of two words, but you won’t know what they are unless you saw the show. By the way, they’re H.B, shorthand for human brain, something you can look up online now but I didn’t have that luxury back then.

What’s so brilliant about this game is how Konami managed to capture the look, feel and sound of the characters. From Turtles in Time to the Castlevania series, Konami has never been a slouch on the soundtrack front and here it’s no different. The themes are exceptional renditions of the show’s that you’ll be humming while playing and after you’ve turned off your SNES. It’s also glorious to simply see Batman’s colorful sprite run across the screen with his cape beautifully flowing behind him, then eclipsing his frame when he crouches. The bad guys, mainly gangsters, resemble the goons the Dark Knight goes up against in almost every episode and the rogues gallery are equally as impressive to behold as Batman. 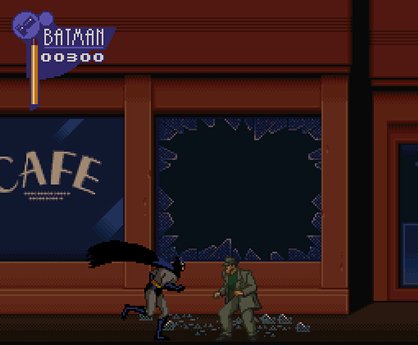 It’s amazing I’ve gotten this are in to this review without mentioning how this game actually plays, and in that department, it doesn’t let you down either. At its most basic, The Adventures of Batman and Robin is a side scrolling action plat-former that actually shares a lot of DNA with Batman: The Video Game. The controls are simple: run, jump, punch, and fluidly wall jump like in Batman: The Video game. You can also equip yourself with a number of gadgets including a grappling hook, batarangs, smoke pellets, and X-Ray goggles among others. The player is given the choice what gadgets they want to take into a level with them, in all honesty most levels can be beaten with just the batarang and grappling hook, but if you find yourself in need of a particular toy you can exit out of a level to get it with no penalty.

Starting out you’ll think that every level plays out the same: run, jump, punch some bad guys, fight a boss, and if it did, it would still be great. The joy in this game though is seeing what gimmick is around the corner that changes up the gameplay. It starts out simple enough from level one to two with your basic attacks changing from punches to bataranag throws, but by level three you’ll have to adapt to moving in and out of rooms, using your flashlight tool to scan the floor for mines, engage in an aerial fight with Catwoman, the list goes on and on.

I do very much appreciate how the game manages to change itself up every so slightly between levels to avoid repetition, but some of the levels are better than others. The stages that emphasize action plat-forming are of my favorites, but that’s mainly because those are my favorite type of games. The third stage where you have to rescue the staff of a museum kidnapped by the Penguin is  tedious because your going back and forth through rooms that all look exactly the same with the only vague clue that there’s “someone on this floor.” The sole Batmobile stage is also a let down as it’s on a strict time limit where even missing one of the very tight turns means a life lost. 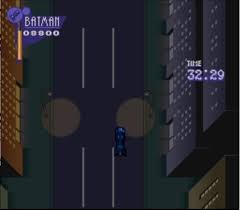 Whether or not you’re a fan of Batman: The Animated Series (though it helps greatly,) The Adventures of Batman and Robin on the SNES is a classic 16-bit action game that should be in any fan of the genres library. A great score mixed with stunning fluid animation and tight control, playing this makes me wish that Konami was still in the game of making licensed games that rose above the rest, instead of games like this. Outside of a series of games that have “Arkham” in the title, this is the best Batman experience in the video game medium.

4 thoughts on “NO ARKHAM KNIGHT, NO PROBLEM: THE ADVENTURES OF BATMAN AND ROBIN (SNES)”