Man, that cover, just…wow. The Punisher looks like he’s going to jump off the box and swallow you whole.

Before I get into talking about this game, I’m going to lay out some things. This game is a conversion of an arcade game, however growing up, I didn’t have a local arcade, the closest was in a mall located in a city more than an hour away that I could only visit when I was lucky enough to go on a trip with my parents. I’m bringing this up because I have no experience with The Punisher arcade game, I don’t recall ever seeing it when I had the chance to actually visit an arcade, and therefore I can only fairly evaluate this game on its own merits.

In reading about The Punisher Arcade to write this, I’ve heard nothing but high praise over the arcade game, with some calling it perhaps one of the greatest beat-em-ups of all time, yet the Genesis port is either considered to be at best a decent conversion, or blasphemous to its arcade counterpart. Now, I’m sure those are all fair statements, I’ve made it known that I’m not a huge fan of the console, but as I only have the Genesis game to go on, I’m choosing to look exclusively at the port.

Now, on with the show…

Capcom didn’t invent the beat-em-up genre, its roots go back as far as the 1970’s, but you can’t argue they didn’t help it become one of the most popular types of games on both home consoles and arcade cabinets in the late 1980’s-early 1900’s. In fact, when many were referring to a beat-em-up, it would be labeled as a “Final Fight Clone” in the same way First-Person-Shooter’s were called “Doom Clones” before anyone knew what a first person shooter was.

The Punisher is a game that you could call a “Final Fight Clone,” but don’t take that negatively, it’s just that the parallels between the two games is uncanny: the weapons (baseball bats, knives, swords, pipes,) throwing a knife after so many physical stabs with it, finding full cooked chickens in barrells, the list goes on.

This game is a rare one for Capcom on two accounts. The first being that the home conversion was not handled by them, but out-sourced to Sculptured Software, those who brought Mortal Kombat II to the SNES. Sure, a lot of Capcom games today are developed outside of Japan, but it was more or less unheard of in the 16-bit era. The second is that this game only came home to the Sega Genesis and not the SNES. In the 16-bit era, the ratio of Capcom games on the SNES to the Genesis is 4:1, and the only time the company provided any exclusives to the system was in the pre-SNES era where the Sega Genesis was the only 16-bit machine in town. Try as I might, I’m not able to come up with an official reason, though it could have been something as simple as Sega paying a hefty sum of money to make the game an exclusive. People speculate that it may have been turned down by Nintendo because of the violent nature of the character, but this was released at a time when people were pumping quarters into machines to get the chance to rip their friend’s head off. 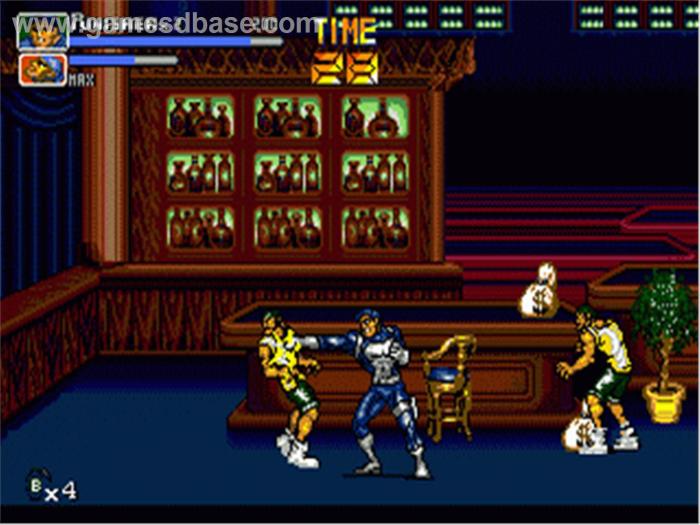 The story in The Punisher can probably be summed up in a sentence or two: The Punisher kills bad guys, and he’s out to bring down the biggest bad guy of them all: Wilson Fisk, otherwise known as the Kingpin. As the title character, you fight through the seedy parts of New York, dispatching thugs, ninja’s and robots along the way to the Kingpin’s stronghold. Should you have a friend with you to come along for the ride, they’ll join your crusade as Nick Fury, Agent of S.H.I.E.L.D.

I’ve already made more than enough comparisons to Final Fight, but it should be stated that while this game has two different protagonists, they’re nothing more than simple sprite swaps of one another. Unfortunately that means that you won’t get any extra mileage by trying to play through the game again as another character, but on a more positive note, your friend won’t feel short-changed when they get stuck with the character they don’t want. 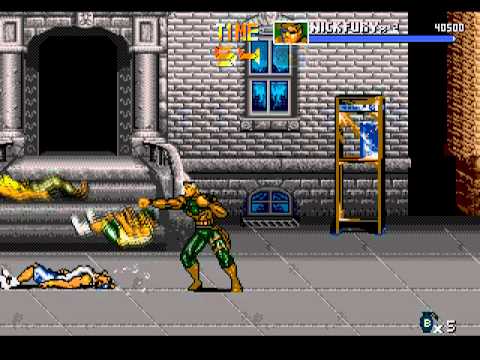 Frankly speaking (see what I did there, because The Punisher’s name is Frank Castle…ahem…) The Punisher could be a much more violent game, as he’s showing restraint here by merely punching on guys as opposed to putting bullets in them. That’s not to say that you won’t get to pick up some firearms and cut loose. In certain sections your character will draw a handgun that immediately locks on to all in your way, giving you the opportunity to hit the attack button and let the bullets fly until your clip is empty. Handguns aren’t the only ballistic weapons you’ll come across: assault rifles, Uzis and flamethrowers are dropped your opposition, but they don’t lock on to their intended target. You also have a stash of grenades you can unleash for a screen clearing attack by jumping in the air and hitting the applicable command. A pro tip is to save your bombs for the bosses, unless you’re going to get killed, for when you respawn, your grenades do as well.

The Punisher is going to need everything in his arsenal to bring down the Kingpin, as actually bringing down the crime lord is no easy feat. You get three lives, three continues and that’s it; No matter how many goons you beat on, or garbage pail money bags you get to increase your score, it won’t raise your spare life counter one bit. If you turn the game down to easy, it’s one of those games where you reach a certain point and your told to start over on a higher difficulty. Hell, if you manage to get through the game on normal you’re more or less told by The Punisher to man up and try on hard.

Don’t get discouraged though, The Punisher is a tough game no doubt, but it’s a fair tough that can be beaten. To increase your chances, recruit a friend if possible (or a Fonda in my case, she’s the talented person who redesigned the site and has helped me get through this game, as well as Captain America and The Avengers.) If you choose to go the solo route, the best I can say is good luck, you’re going to need it!

There’s a lot of great beat-em-ups starring super heroes: Konami’s X-Men and Batman Returns, Data East’s Captain America and The Avengers, Acclaim’s Maximum Carnage, and The Punisher can easily stand ranks in their company. Anyone looking for a great co-operative beat-em-up would do themselves a disservice by not checking out The Punisher, and that still applies if you don’t care about the character, or even games based on comic book characters. A word to anyone trying to track down this game: it is rather rare as well as quite pricey, and it’s only pure luck that I have the copy in my possession. That being said, I would easily recommended this game at a high price over most brand new games that are put out on store shelves today.